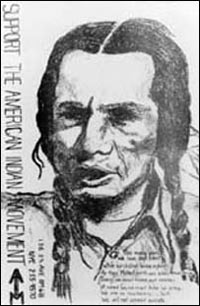 The American Indian Movement (also known as the AIM) was formed and based in
Minneapolis, Minnesota, in 1968. 200 Native American activists gathered for a
meeting led by Dennis Banks, George Mitchell and Clyde Bellecout. At the
meeting, they discussed issues restraining Indians and how to take their own
independency.
The American Indian Movement spoke and acted
against high unemployment, racism, bad housing and they also fought for treaty
rights, of which many had been removed with the Indian Termination Policy. Their
activism garnered the attention of the FBI and the CIA, who tried to abolish the
movement.
The suppression of the American Indian Movement
ultimately led to a revolt, where Russell Means headed a group of thousands of
protestors at Wounded Knee. They chose the location due to its historical
significance (the massacre of 1890) and because they believed the governmen at
Wounded Knee had been corrupted. A standoff began, lasting 71 days. Two were
killed, 12 wounded and more than 1200 arrested.